With the tactical model for

“Reverse Engineer preparation from the Game Demands”.  If I had a dollar for every time I’ve said, read, or heard that statement, I’d be the youngest, and arguably first ever, strength and conditioning coach to retire from the profession.  Unfortunately, the opening statement is one uttered mostly by Strength and Conditioning coaches and (in my experience) mostly ignored by all others associated with the sport preparation process.  I believe that ignoring the physiological demands of practice design in order to justify tactical and technical preparation is misguided – it is leaving plenty of game-day performance unattained.  In this article, I am going to present how I believe sport performance and preparation can be optimized by aligning all physical constituents with the organization of technical and tactical development – I will use college soccer as an example and will look to write about other sports I’ve had experience with.

​The idea of tactical periodization is not new – if you haven’t heard or read about it, I encourage you to.  Tactics are influenced by the players on the team, style of coaching, formation the team utilizes, as well as the opponent that they will be facing.

Utilizing a basic tactical philosophy in soccer, the four major phases of play can be broken down into:
Each phase of play can be simplified by an overarching principle – for example:
Each overarching principle is made up of their own principles, labeled as sub-principles, such as:
There are sub-sub-principles that contribute to each sub-principle, but those are not necessary for me to expand on for this article.  When critically spectating, thinking, discussing, and matching the game and practice data to each principle and sub-principle, you will start to see commonalities in the associated physical constituents.  On average, some sub-principles will require relatively higher velocity average running speeds, greater number of explosive maneuvers such as significant changes of momentum or high effort kicking and jumping, and/or body contact.

​In regard to higher velocity average running speeds the sub-principles would include: In regard to explosive maneuvers such as significant changes of momentum, high effort kicking, jumping, and body contact
Utilizing a high-low classification system for physical stress, it becomes easy to assign certain sub-principles and their physical constituents to specific days of the weekly training structure.

Weekly Training Structure
​
I have provided the general structure for my philosophy on training load application and management.  You can make the assumption that it is for high-minutes players.  I know, there are different training needs for low-minutes players as well as a needed weekly structure for 2 matches in a week, but that is not within the scope of what I want to cover in this article.  I believe in a past article, I mentioned there being close to 17,000 yards of total volume per game, on average – after going through and removing time prior to the match and after (where the GPS may have been tracking, but competition [including warm-up] wasn’t happening) – the average was closer to 11,000 yards per game for our highest yardage group (center midfielders).  The highest game average for our center midfielders during a match was 13,000 yards – still almost 25% less than originally thought.  High-speed volume is all yardage that is accumulated while the student-athlete moves at 75% or faster of their own maximum velocity (this is calibrated in the PlayerTek website).  That can dramatically affect preparation volumes and intensity.

Let’s assume Match Day (MD) is on Sunday, so MD+1 is Monday and MD-1 is Saturday, the day before the next match.

​MD+1
I’m a firm believer in the off-day occurring the day after the game.  The mental and emotional recovery, as well as the physical, is served well by providing the student-athletes with time away from their sport requirements.  Utilizing passive recovery methods such as mindfulness, breathing methods, compression, massage, water therapy, sauna, vibration, and electrical stimulation are all great options based on resources.  These methods can always be utilized by student-athletes but are the foundation of MD+1.

MD+2
First session “back on their feet” following MD.  This is the day to address the biggest tactical weakness from the previous match – you can walk or jog through specific tactical set-ups where there were breakdowns and address the changes to be made while keeping everything at 50% max velocity or less with no explosive efforts.  The total volume should be kept under 15% of MD.  Active recovery methods such as stretching, non- or minimal-impact aerobic exercise (like pool/bike/elliptical), and low-intensity aerobic activity (such as the aforementioned walk-through) serve as great supplements for the day.

MD+3
The third day after MD and the fourth day out from the next match.  This is my preferred day to provide our highest volume of training, yet it's still classified as a low-CNS day.  The tactical focal points that are utilized tend to be more “flowing” types of play situations, so the velocity of running is below 75% of max velocity.  Tactical concepts such as building up from the GK and creating space to play provide environments for student-athletes to acquire lots of yardage per drill, but shouldn't elicit much for high-speed running.  If there is a great need for addressing max velocity mechanics and forfeiting time for tactical improvement, extensive tempo running fits well on this day.  Total session volume should be kept between 40% and 60% of MD volume.  Upper body strength training prior, during, or after tactical training sessions is a great supplement; this can provide a strength stimulus that is very general to the sport of soccer since it is a sport dominated by the outputs of the lower body.  In combination with the tactical focal points and goals for limited running speeds, the session should be carried out on half-field or less.

MD-3
Three days out from the next match.  The student-athletes have experienced a very manageable dose of volume on their legs over the past couple of days, so the intensity of exercise asked of them can be increased while minimizing the risk of soft tissue injury.  Today can be thought of as the most competitive day aside from MD.  The tactical focal points will put the athletes in environments to exhibit high-CNS outputs such as sprinting to a ball, shutting down space, and pressing the opponent to make mistakes.  Tactical sub-principles such as defensive press concepts and having the attack take advantage of space and opponent disorganization seem like an ideal fit.  Those sub-principles put the student-athletes in a competitive environment to make high-speed runs and play with great intent.  The day can be supplemented by starting a session with max velocity sprinting to provide the athlete a closed environment to improve mechanics, provide a small dose of intensive jumps and/or medicine ball throws, and follow-up the session with an appropriate volume of slow-speed lower body strength training.  The importance of an exposure to 95+% of top speed is vital to maintaining the student-athlete’s ability to produce the highest physical output required.  The total volume of the session should be kept between 15% and 25% of MD but include 50-70% of MD high-speed running volume.  The tactical focal points and emphasis on high-speed running, allow utilization of the full field.

​MD-2
Two days out from the next match and it is following up our high-speed, high-CNS day.  The tactical focal points are similar to MD+3 but are now implemented with close to half the amount of total volume.  This requires the prioritization of sub-principles and the knowledge to understand which sub-principles need to be physically experienced and which can be mentally prepared for.  ​With it being close to the next match, getting a lot of touches on the ball is a priority.  Offensive sub-principles focused on maintaining possession and defensive sub-principles focused on directing the opponent into certain directions will put everyone in a position where quick decision making and quality touches are emphasized.  The supplementation of active recovery methods such as stretching and non-impact aerobic training amplify the recovery process from the previous high-CNS day as well as the feeling of “being fit” without garbage ground-contact volume.  Once again, the tactical focal points can be carried out on half-field or less.

​MD-1
The day before the next match.  As much as I think the term is corny, this day serves as the “primer” for game day.  Tactically, address the big rock sub-principles via verbal and film means.  Use the day to fine tune set-pieces such as corners and free-kicks as well as providing your forwards opportunities to finish while running onto the ball.  The total distance volume will be kept under 15% of MD and between 10-20% of MD high-speed distance.  These tactical concepts can serve as a micro-dose of speed and power movements that can provide a healthy amount of tone in the body for the student-athletes to perform at the highest level on MD.  All of these tactical and physical output goals can be accomplished on a third of the field.

On high-CNS days, create environments where the student-athletes have the time, space, and energy to make high-speed runs.  Fresh reps are fast reps; fast reps translate to the most impactful moments on game-day.

On days where running speeds should be limited, the staff can apply logic by creating field-dimension constraints, as well as “over-populating” the field-of-play so that no players are put in an environment where they need to run at a high velocities to be successful.  Boo Schexnayder has presented the idea that moderate-to-high heart rates that elicit a small-to-moderate amount of lactate can be utilized on low days as long as the volumes are appropriate and done at low-velocities.  This still allows for the development of tactical and technical improvement, match-specific energy system development, and keeping the goal of low-CNS stressors consolidated on those days.

Below are a couple of tables taken from the research article, “Optimizing the Use of Soccer Drills for Physiological Development” by Thomas Little.  These provide general examples of how pitch sizes, numbers-per-team, and drill design can be utilized. 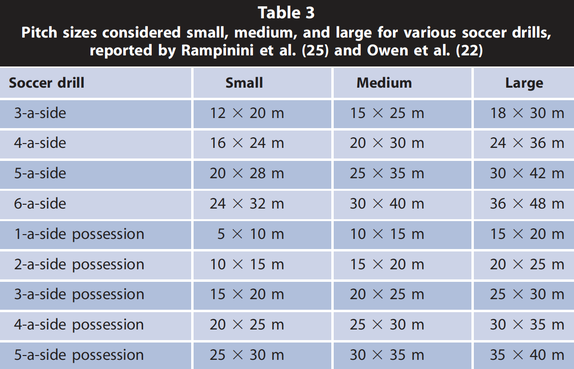 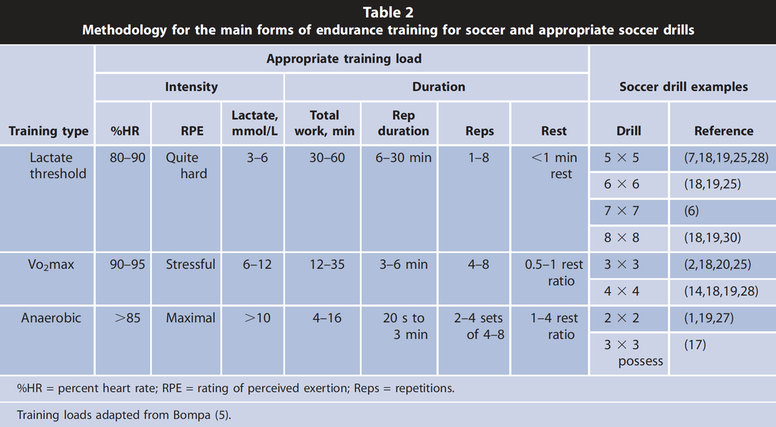 ​If the maximum amount of volume relative to game demands is used for each training session (NOT including the additional buffer of the standard deviation), the student-athletes will have acquired an additional 160% of game load; so over 1 and ½ games added to the 1 match they already play.  If that is somehow not enough training volume, then the sport staff may need psychological help more than the student-athletes need physical training.

I can't stress enough the importance of your own environment and cultures - awareness of academic stress, the caliber of athletes, level of competition, style of play, number of coaches, and resources are a few of the factors that can drastically influence the entire implementation of this structure.  This is not the most in-depth view of sport preparation, but I feel this is a step in the right direction.  My goal was to provide ideas with a general structure that could be implemented right away and fine-tuned with the cataloging of drills with the GPS software.  In Part 2, I will provide the off-season structures and explanation for their set-up.  I look forward to hearing feedback about this one.