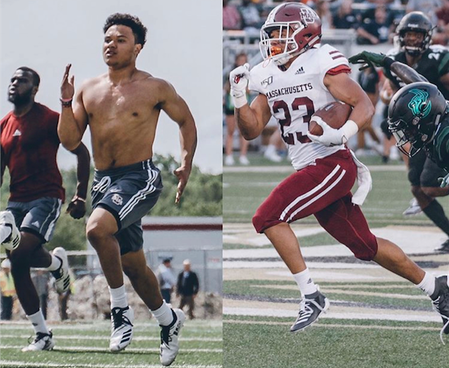 When training high-speed movements for sports, spending time worrying about, coaching, or training any sort of technique that is being changed through conscious thought is a poor use of time.  Sprinting, jumping, cutting, and landing in a chaotic sporting environment is happening too fast and in such a context-specific manner that there is little to no time for the athlete to be actively thinking about what their technique looks like.  Are they in a perfect snap-down landing position?  Are their hips stacked underneath their shoulders in good postures when upright sprinting? Are they dropping their center of mass and efficiently shifting their weight when changing direction?  If you ask the athlete those types of questions at the end of a play they will have absolutely no idea what the answer is.  They are thinking about grabbing the rebound, running down a break away striker, or tackling the opposing running back, not the underlying physical movements that went into those larger sporting situations.

As a coach, working to improve the technique that is exhibited in these high-speed movements is a crucial aspect of our jobs.  I would rank biomechanical efficiency of movement as potentially the most important quality that we can have an impact on.  Injury and tissue breakdown in sport will always eventually come back to being a manner of the load being applied, but being in good biomechanical positions shifts that load threshold.  I say all that to ensure that the opening paragraph does not get confused to say that biomechanical efficiency during high-speed movements is not important because it absolutely is.  How we go about improving movement efficiency in training such that it actually carries over to the sporting environment is the focus of the article.

I view high-speed movements in a sporting environment through the lens that your body will put you in the most efficient positions that your current strength, elasticity, ranges of motion, and postural abilities will allow.  These movements happen too fast for much, if any, of the movement to be taking place at a conscious level.  If an athlete possesses the requisite strength, elasticity, ranges of motion, and postural abilities, to perform the movement with “good technique” then they will, and vice versa.  Using this as a starting point shapes all the drills and environments that I provide for athletes in training.

Landing in good positions in training is still useful in order to minimize stress on passive structures but let’s not kid ourselves that the technique of a snap-down in a sterile environment is carrying over into a high-speed basketball game.  Performing a snap-down in training might be appropriate for that level of athlete in order to build those physical capacities but if we dive in deeper I think we’ll find there are more appropriate ways to overload those tissues and more efficient ways to use our time in order to get the results we are looking for.

Snap-downs and similar regression/progressions of them can be useful as an introduction to more advanced plyometric training but I fail to see the carry over of “mechanics” from a sterile setting.  There are two main reasons for this lack of carry over: lack of conscious thought during competition, as mentioned previously, and the context specific nature of every jump and landing.  How someone jumps or lands in competition will be completely dependent on their movement leading into the jump, movement while in the air, and intended movement upon landing.  On top of that, they will account for the environmental factors such as where the ball and other players on the court are located.

Yes, landing in a perfect athletic position is the best way to land biomechanically, if you’re dropping off a box with little to no external stimuli and are expected to completely stick and hold the landing position but if I’m leaving off one foot to block the shot of another player and upon landing have to immediately run back down the floor, how I go about landing is going to be very different.

Performing rudimentary movements in the hopes of changing mechanics is not inherently bad but it’s most likely a waste of time.  For example, basketball players are essentially playing year round and getting hundreds of jumps per week.  You could spend 10 minutes of your training teaching perfect landing mechanics and then they immediately go out to open gym and perform a few hundred jumps in whatever positions the game or drill requires of them.

Athletes will inevitably take off and land in a variety of funky positions that are context specific.  Therefore, seeing as it is impossible to account for all these different contexts in a training setting it is more useful to expose the athletes to a variety of takeoff and landing scenarios and constraints while the primary focus is overloading and building the physical traits associated with performing those movements in good biomechanical positions.  If there is a player prone to taking off or landing in disadvantageous positions, identify the underlying issues (strength, mobility, elasticity, etc.) for that player and mitigate them accordingly.

Applying these principles to change of direction produces a similar argument.  While there are overarching attractors and detractors associated with the ability to change direction, exact technique in how a player changes direction will be context specific.  If they fall into a disadvantageous position, either they did not perceive their environment well enough and were in poor spot from a tactical stand point or they were in the correct spot and did not possess the underlying physical qualities to get in and out of the necessary joint angles and positions.  Unless you’re preparing for a pro day, worrying about where exactly to place one’s foot in an out-of-context change of direction drill does not seem like an efficient use of time.

From a purely physical standpoint, changing direction comes down to possessing the requisite speed, elasticity, and yielding strength needed to start and stop the body in all 3 planes of motion.  There potentially can be value in performing rudimentary change of direction work because it can build an understanding of where one’s center of mass is in space and in relation to your base of support.  Personally, I choose to build that same understanding of body positioning through means that overload the physical qualities as well, and lean towards a variety of multi-directional plyometrics as the go to builder of the physical qualities in change of direction.  I have seen other coaches manipulate closed change of direction drills in such a way to get a similar desired effect.  Overall, just know and understand what exactly you are seeking to overload and build drills and exercises accordingly.

Again, this does not come down to right or wrong, it is about attaining the desired outcomes that we want to see during the sporting activity, while being as efficient as possible with our training time and resources.  For field sports that require running and jumping, most training activities involving sprinting, jumping, and cutting would be categorized as a specialized developmental exercise (SDE) in the Bondarchuk system.  If I am including an exercise from this category into the program it is because it either requires more force or requires more velocity than the sport itself.  If it does not, I almost always cut it out and let that time and energy be used for more skill development in the sporting activity.  SDE and competitive exercises (CE) are inherently similar enough in nature to be competing for similar resources.  As an example, if I am training wide receivers, instead of including any sort of rudimentary change of direction to go along with speed work, plyometrics, and general strength training, I let that time and energy be used to run more routes with the quarterbacks.

In field-based sports, positively impacting on an athlete’s sprinting technique is at or near the top of my priority list.  It is the most often performed skill as well as the most neurologically taxing.  Incurring thousands of ground contacts in a game in biomechanically inefficient positions is going to catch up with you at some point.  Pure sprinting and thinking are incompatible so we must therefore carefully select the drills, environments, and cues we use in order to change sprinting technique and have it carry over into a competitive setting.

Better technique in a sterile setting, similar to jumping, landing, and changing direction, will not carry over to a competitive setting if the changes are only being made in training through conscious thought from the athlete. Harkening back to my overarching statement of how I view high-speed movement, if the athlete possess the proper postural abilities and suppleness to go along with elasticity and force production, sprinting shapes will more often than not naturally happen.  If an athlete is not hitting good shapes, it is crucial to identify the key limiter.

Start with Newton’s third law of motion when deciding what is going wrong with someone’s sprint shapes.  If you coach a reaction without addressing the underlying causal action, the changes made will be through conscious thought and will not carry over as well, if at all, to a competitive setting.  In field sport athletes that I have encountered, this means being careful not to bring active, limb-based solutions to posture or force production based problems.  For example, excessive backside mechanics stemming from an out of control pelvis might look prettier in isolation from “driving your knees up” but you could potentially be slower in those prettier shapes because of what you are taking away from force production.  And if the underlying pelvic issue is not addressed, the athlete will revert back once they are in a competitive environment and they aren’t actively focused on it.

Just like with jumping and change of direction, sprinting technique will be slightly different in-game based off of the environment being presented to the athlete (ex: a running back staying slightly lower hipped than usual in anticipation of contact).  Making sure to target the underlying qualities that are inhibiting good shapes ensures that the improved biomechanical positions are coming from unconscious self-organization and not conscious thought.  This allows the shapes to be morphed and carry over into varying environments ranging from of a field hockey player needing to run a little more hunched over in anticipation of receiving a pass, to a running back that has nothing but green grass in front of him for 80 yards and he falls into picture perfect shapes.

To wrap up, techniques for the fundamental movements of sprinting, jumping, and cutting will not carry over into a chaotic sporting environment if they require forebrain activity.  Building up the physical capacities associated with these movements and providing learning environments such that the body organizes itself into advantageous positions when conscious thought is removed will have a much better chance of carrying over into the chaos of sport. Ensure that your athletes have the requisite postural strength and tissue suppleness to attain advantageous positions.  Next, build speed, elasticity, and strength going into, holding in, and coming out of those positions to maximize biomechanical efficiency.  Lastly, make sure you are doing all of this in a way that is efficient with time and energy resources so that the athletes can practice the sport as much as possible.